I, CULTURE Orchestra  is a unique project of Adam Mickiewicz Institute, which was founded to gather talented young people from Armenia, Azerbaijan, Belarus, Georgia, Moldova, Poland and Ukraine .This year I, CULTURE Orchestra performed under conducting of  Kirill Karabits, who was named Conductor of the Year by Royal Philharmonic Society. Concerts were held in Gdansk , Reykjavik, Gothenburg, Tallinn and Kiev. During the concerts, which continued from August 26th  to September 4th, the orchestra performed works by Boris Liatoshynsky, Sergei Prokofiev, Béla Bartók and Witold Lutoslawski .Two weeks before the tour, rehearsals and classes with renowned teachers from Europe and USA were hold in Gdansk (Poland).

Coordinator of International Projects of International Competition for Young Pianists in Memory of Vladimir Horowitz - Kateryna Alymova was actively involved in the tour preparation of I, CULTURE Orchestra musicians. During organization of a large-scale cultural project, she became an important member of the team, helping communicate professionally between musicians and teachers from different countries. 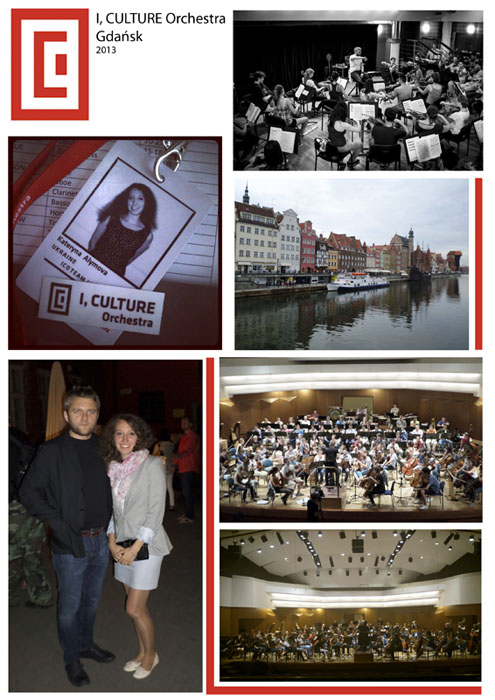