Our country is getting closer to global renaissance 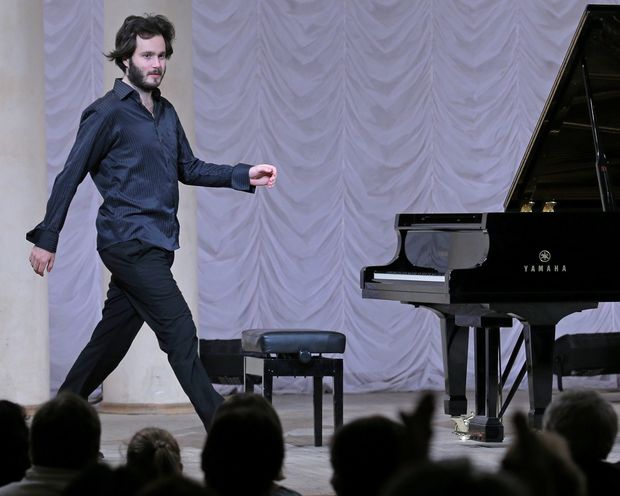 Everything performed by the musician was deeply thought through, felt deeply, and verified. The pianist has shown a long non-standard program, which has embraced music pieces from baroque to the middle of the 20th century, and performed not only classics and romantics - Scarlatti, Schumann - but also the avant-garde, which is so rare in the walls of Lysenko Column Hall: Olivier Messiaen and Gyorgy Ligeti.

The audience took a special interest in seven sonatas for harpsichord by Domenico Scarlatti (1685-1757). The performer has "modernized" the old-time works, interpreted his miniature sonatas in a romantic and bright way, with an emotional tension. The first culmination of the evening was the final sonata in E major, bravura, joyful, and performed in a virtuoso way. The first act ended with three plays from the most famous piano cycle by Olivier Messiaen "Twenty gazes upon the child Jesus" (1944): "The Virgin's first communion," "Contemplation of the star," "Christmas." Baryshevsky performed them with perfect taste, in a heartfelt and enchanted way.

After the interval "Musica ricercata" by Hungarian composer Gyorgy Ligeti was performed. He is known to the broad audience due to the soundtrack to the film by Stanley Kubrick 2001: A Space Odyssey. The master created a kind of miniature cycle in 1951-53 practically in a series technique.

At the end the pianist brilliantly interpreted the Second Sonata in G minor by Schumann. He "danced" the enchanting Mazurka in C major by Chopin encore in a refined way. The concert proved that Ukrainian piano school is at its blossom, the young soloist has a huge potential and is leading the path of self-perfection.

There are vocalists with an impressive sound, and the audience comes to enjoy their voice, forgiving them the imperfect performance on stage. There are pianists with divine touch. What is the most important thing for you? Beauty, quality of sound, self-expression, or building of the "architecture" of the music you perform?

"The best thing is to play on a good instrument. But we have big problems with that. Today I was performing on Yamaha. And you need to have a school. Our piano school that comes from Neuhaus envisages high quality of sound. The sound is very important for a performer. I used to work a lot on this. The first-time task of a performer is to show an interesting repertoire. But it would be insincere to say that you don't express yourself on the stage. And there is nothing bad about it if these sides are balanced. But if a performer in music expresses himself/herself first and foremost, the result is a caricature. Parity between the intention of a composer and inner world and self-reflection of a performer is a perfect thing."

What are you guided by when you choose the repertoire?

"I want to understand how much the work ‘touches' me, how much I want to live in it. In this aspect I have become very interested in Gyorgy Ligeti I've performed today. This is a minimalist work of very interesting cyclic shape (11 plays with more dense stop and increasing number of the notes used in every play - from two to 12 sounds in the last Andante, where the series technique was actually applied)."

Which of the competitions you took part in are the most important for you?

"Competitions are an exhausting process. I think that the Arthur Rubinstein Competition in Tel Aviv (Israel), where I won the gold medal, was important for me. As well as competition in Spain, in Jaen. The Horowitz Competition in 2005 was significant for me [it marked the beginning of the creative growth of the young pianist. - Author]."

Less than a year has been left till the beginning of another Tchaikovsky Competition (Moscow). In your opinion should Ukrainian pianists take part in it?

"Oleksandr Romanovsky [former resident of Kharkiv who has been residing in Italy since childhood, studied in London, and before the competition many times performed with Gergiev and Spivakov. - Author] won a prize in the latest competition. Every musician should decide for himself whether he should take part in a competition of not."

Several days ago director of Horowitz Competition Yurii Zilberman announced that his creation may leave the territory of Ukraine. Today there is a proposal to hold the competition in Georgia, Italy, or Germany, because many participants are afraid of unstable situation in Ukraine and refuse to go to Kyiv.

"In fact, many foreigners are afraid to go to our country. I can understand both the parents and the participants of the Horowitz Competition: these are children. Who is going to risk young lives? I want the political situation in Ukraine to come back to normal as soon as possible. It is insulting that there are versions of bringing the Horowitz Competition out to other country. By the way, the Kharkiv Competition of Volodymyr Krainev has already moved to Moscow (It was ‘brought out' by Tetiana Tarasova, Krainev's widow). This is unpleasant. This competition was significant for Kharkiv, it has revealed many talented musicians. In Moscow this event will get lost, because there are many creative projects of this kind."

What do you think about musicians who earn money by taking part in competitions? For example, Alexey Chernov from Moscow performs at numerous competitions. He is a good pianist, a father of three children who must be supported.

"Yes, Chernov is a very skilled pianist. There is also Oleksandr Yakovlev for whom competitions have become a way to earn money. On the one hand, in terms of finances this kind of earning money is no worse than the rest. In terms of music, it has quite an indirect relation to music. This is actually business. The musician does not say anything new with his performance, and actually wins due to the programs which he has rehearsed many times. For the competition does not envisage that a person will play in the second round ‘Twenty gazes upon the child Jesus' by Olivier Messiaen. Such contestants play in the same way all works, their performance becomes standardized. In one interview Alexei Lubimov noted bitterly that ‘not schools, but competition anti-schools are developing now.'"

Share your experience: what is more difficult for you, to perform a 1.5-hour-long concert or to play at a competition?

"Taking part in competition is more difficult. Although when you perform in your native town the walls help you, but at home you feel more responsible before the audience, because it is more demanding."

Do you take part in concerts for ATO servicemen?

"Yes. Recently Vira Symych [Antonii's wife, a violinist. - Author] and I performed at GogolFest at a charity concert for the ATO. The program was called ‘Music of enlightened authors of the 20th century,' where the works by Messiaen, Paert, Retynsky, and Scriabin were performed."

Antonii BARYSHEVSKY was born in 1988 in Kyiv. He took up piano when he was seven. He studied at the Donska State Specialized Music School No. 14. In 2007, after he graduated from Lysenko Music School, he entered Tchaikovsky National Music Academy of Ukraine, V. Kozlov's class, where he is now training at assistantship program. He is also studying in Paris High Music School. Apart from that he has attended the master classes of Alfred Brendel, Daniel Pollack, and Lily Dorfman. Since 2012 he has been a soloist of the National Philharmonic Society of Ukraine.

Baryshevsky is a winner of over 20 international competitions, as well as several all-Ukrainian competitions and festivals, in particular:

- in 2014, 1st place, gold medal and special prize for performance of a play by an Israeli composer at the 14th International Piano Master Competition in Tel Aviv (Israel);

- in 2013, 1st prize at the International Piano Competition in Paris (France), etc.